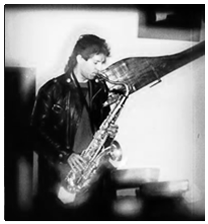 Artist, songwriter and tenor saxophone player “Saxy” Carlo Novi grew up in Mexico City, where he became an accomplished musician.  Most notably, at the age of 15, Novi played with Javier Batiz, a legendary guitarist credited with the birth of rock music in Mexico, was mentor to Carlos Santana and nicknamed “El Brujo (the Wizard).” The drummer in Batiz’s band was Adolfo “Fito” de la Para, who went on to become drummer with the blues/rock band Canned Heat. After moving to the Jersey Shore, Novi became the original tenor saxophone player with Southside Johnny and the Asbury Jukes. Novi played with the Jukes from 1975 through 1977, appearing on the band’s first two albums, “I Don’t Want to Go Home” and “This Time It’s For Real”, which included collaborations with Lee Dorsey, Ronnie Spector, the Coasters, the Drifters and Five Satins.  He designed and created leather clothing for many performers, including members of the E Street Band. He was also a painter, a sculptor, a poet, spoke 3 languages and was very much a modern day renaissance man.  After leaving the Jukes, Novi played with a series of bands. He was the co-founder and tenor saxophonist in The Shots, as well as playing with The Charlottesville All-Stars, an original project called Dada Jungle, which was the musical precursor to the band Morphine and the Intentions and continued his career as a contemporary artist. His daughter, Aria, is also an accomplished musician.

A Lifetime of Music
I had the honor to hear Carlo play from his earliest years in Mexico City through his stint with the Shotz. My favorite solos were played on a vintage golden Selmer soprano sax. He sounded like an archangel. What a wonderful, gifted, talented, beautiful funny man! I remember when he and Clarence used to hang out in our walk-in closet in our carriage house in Rumson, growling into their tenors. His wonderful daughter is also mine, and she is definitely a rockstar.
posted by Andrea Ros on June 4, 2014

Southside Johnny and the Asbury Jukes, 'Love on the Wrong Side of Town,' Old Grey Whistle Test, 1977